Sauce Golf Co’s cooler towel is getting a Kickstart

It’s not often we highlight a product yet-to-be available to anyone, but we’re making an exception for Colorado-based Sauce Golf Co. The fledgeling company had been promoting its innovated cooler golf towel, meant to suit just about any golfer’s needs as a rain guard, shoe bag, towel and groove cleaner, and cooler bag all in one.

It sounds a little gimmicky at first, sure, but what really caught our attention and got us on board was one of the most entertaining infomercials we’ve seen in a while:

Whether you think the cooler towel is gimmicky or not, you can’t argue against the subtle, clean design of the product, or usefulness. It’s not overly flashy or in anyway indicative of the product’s many uses, and worth having on hand when you need it for one thing or another. We definitely won’t mind one on or in our bags.

The video notes availability and dates for the 2019 holiday shopping season, but the company has decided to push the official release of the cooler towel until Spring of 2020. In the meantime, Sauce Golf Co hats and shirts are available to backers at the $25 level or higher via the company’s KickStarter page, with proceeds going towards the improvement and relaunch of the cooler towel. The no frills design of the shirts and hats sport a throwback-esque text logo in red/white and green/yellow schemes.

As of this writing Sauce Golf Co. has just over half of its listed fundraising goal of $1000 with a couple weeks left in the campaign.

ColoradoGolfBlog, in some cases, receives a small commission when you purchase items from these links. CGB has endorsed all advertisers, products and services and advertising does not influence editorial decisions or content.

Will the PGA Tour’s new pace-of-play policy really change anything?

When word that the PGA Tour Policy Board had passed and will implement new pace-of-play guidelines during the 2020 season began to spread, the age-old cycle of news headlines, analytics, anonymous sources, finger pointing and speculation got another big boost. We don’t know all the details of the new plan, and won’t until the Tour makes its official announcement about the change (reportedly coming early 2020), but we do know enough to keep the speculation going until then.

Golf Digest reports the new policy will shift the Tour’s focus on players in groups that are out of position to individual players regardless of group position, which is in-line with the Tour’s August announcement that it would be taking a closer look at the pace-of-policy. That announcement came on the heels of the “recent incidents,” the Tour cited at the time — those incidents being Bryson DeChambeau’s antics at the 2019 Northern Trust and a whole other p-o-p rabbit hole. But back to the new policy. To shift the focus to individual players, the Tour is reportedly going to create a secret shit list of the slowest players so they are more likely to be put on the clock. If a player records a second bad time during a round they will incur a one-stoke penalty.

The new policy is supposed to start a week after the Masters, at the RBC Heritage in South Carolina. That seems a pretty quick turnaround for what’s being talked up as some kind of sweeping, answer-to-all-problems policy — but is it really any of that? There are rules meant to address slow play on the Tour already on the books, though they are pretty weak, obviously. But the bigger part of the problem, one the rulebook can’t fix, is the Tour’s inability to enforce it’s own rules, or unwillingness to do so.

Pace-of-play has been a massive problem for the Tour ever since, well, ever. Any time it looks like the Tour is ready to do something about it, it doesn’t — a story seemingly as old as the game itself. Are we really to believe this new policy is going to change anything?

It’s no secret who the slowest players are, certainly amongst the players themselves, but the fans know it too. What’s keeping a list of the most-likely suspects going to achieve if the same rules officials won’t penalize anyone anyways? What’s the point of keeping the list secret in the first place if we can guess who’s on it? Maybe some good ol’ fashioned online public shaming is the change we need to speed things up.

Despite the announcement, right now the Tour is no closer to solving the problem than it was to begin with. This new policy gives it a new approach at highlighting AND enforcing the problem, but given its track record for penalizing players, or lack there of, the prospect that the Tour has effected any meaningful change is still a toss up.

At least we won’t have to wait too long to find out for sure.

With the explosion of TopGolf and Drive Shack popularity across the US, we here in Southern Colorado have been patiently waiting for our turn at a brightly lit, titillating year-round golf venue. Come summer 2020, the wait will be over.

In a November press release, developers of the ever expanding Polaris Pointe retail complex on the north side of Colorado Springs announced the upcoming opening of Crush Golf and sister facility AirCity360. Currently under construction, Crush Golf will span 54,000 sqft, housing 75 heated driving range “suites” with Trackman Golf tech, a 250-yard driving range, dining and meeting facilities. Crush Golf with be the “first of its kind golf facility in the Pikes Peak Region,” according to the release, offering southern Colorado golfers a way to cure their FOMO with our neighbors to the north (Top Golf has already staked a claim in the Denver area with two locations).

Crush Golf’s sister facility, AirCity360, is said to be an all-family entertainment venue with everything from a roller coaster, climbing wall and “Ninja360” course to dodgeball, trampolines and much more. The two facilities join a host of other attractions in the Polaris Pointe center, including go-karts, shopping centers, restaurants and more to make it one of the premiere entertainment centers south of Denver, located east of I-25 and Northgate Boulevard.

Koepka pulls out of Presidents Cup, Fowler slips in

A lingering knee injury will keep world no. 1 Brooks Koepka outside the ropes when Team USA takes on the Internationals at the 2019 Presidents Cup. The reigning PGA Champion and American Player of the Year announced his withdrawal from the event Nov. 20 on social media, making way for an alternate pick for Team USA player captain Tiger Woods.

Today, I am announcing my withdrawal from the USA Presidents Cup team because of my knee injury. I notified Captain Tiger Woods that despite constant medical care and rehab, I am not able to play golf at this time. I consider it to be a high honor to be part of the 2019 team and I regret not being able to compete. ⠀ Since my injury in Korea, I have been in constant contact with Tiger and assured him that I was making every effort to be 100% in time for the Presidents Cup in Australia. However, I need more time to heal. ⠀ I’m sorry I won’t be able to represent the Red, White, and Blue this time around and I wish my teammates nothing but the best as they work to retain the Presidents Cup for the USA.

Leaving zero time for speculation, Woods gave the nod to world no. 21 and fellow BD energizer Rickie Fowler — Sorry, Kevin Kisner — who’s on the up-and-up after a gastrointestinal infection that made him withdraw from the Myakoba Classic earlier this month.

While Koepka will certainly be missed, the substitution shouldn’t shock anyone or muddy Team USA’s chances of absolutely destroying the International Team. Fowler has repped America in the last two Presidents Cups (2015 and 2017), made six top-10 finishes in 2019, won the ’19 Waste Management Open, and finished top-10 in the Open (T6) and the Masters (T9) this year, and finishing top-20 in the FedEx Cup rankings. Again, not the world’s number one player’s numbers, but still better than the majority of the inexperienced International team. (Plus, who doesn’t love “Big Dick Rick” just because?)

Some of you may have seen already from the release but I‘m humbled and excited to be given the chance to represent Team USA in this year’s @presidentscup. These team events have been some of the most memorable weeks of my career. To be picked by @tigerwoods to compete with him and the rest of the team is very special. It is impossible to replace @bkoepka but I can assure my teammates and American golf fans that I will be prepared and ready to do my part to bring home the Presidents Cup! 🏆🇺🇸

Again we say, USA by a million.

2019 Presidents Cup coverage begins Thursday, December 12, with the fourball opening round followed by the foursome matches on Friday. Saturday brings a full slate with the second round of fourball and foursomes, and closing on Sunday with the singles matches. Tune into the Golf Channel for live coverage Thursday through Sunday, and NBC for a replay of Sunday.

The 2019 Presidents Cup teams are set — USA by a million

Look out world, the Yankees are coming (again).

We’re about a month out from the 2019 Presidents Cup — let the official countdown begin. While speculation of who captains Tiger Woods and Ernie Els would pick for their respective teams for the biennial event — each allowed to choose four players instead of just two for the first time in history — the excitement doesn’t really start until the rosters are set.

That time is now.

That’s the team looking to right the ship against the U.S. after 2017 International captain Nick Price and Co. suffered nothing short of a brutal ass beating at Liberty National just two years ago, the Americans’ 10th victory in 12 events. If you don’t remember what exactly happened in 2017, you’re forgiven: the beating was so thorough it made the final rounds on Sunday all but unwatchable, with the U.S. entering the day with a 14.5 to 3.5 lead. As a matter of fact, if it weren’t for pseudo-spoiler wins by Anirban Lahiri and Si Woo Kim on Saturday, the Americans could’ve closed the Internationals out before the Sunday singles rounds even began.

Embarrassing for sure, but that was two years ago. There’s no way the Internationals will let that happen again, right?

(Related: Koepka pull out of Presidents Cup, Fowler slips in)

A third-person explanation on why @TigerWoods picked Tiger Woods. 😂

Skipping the in-depth analysis and laborious breakdowns you can find elsewhere, the Americans laying it on the Internationals once again at Australia’s Royal Melbourne Golf Club is pretty much a guarantee. First, the U.S. has won seven straight against the International team. And with the exception of Kuchar, every player on the American roster is ranked higher than any player on the International team (Scott and Matsuyama are both raked above Kuchar). Els is fielding eight rookies and the youngest team in Presidents Cup history against the American veterans, three of whom — Koepka, Woodland and Woods — won majors in 2019, and all of whom are ranked top 25 in the world. And last but certainly not least, the Americans have the greatest player of all time turning in a card: TIGER FUCKING WOODS, looking to cap off a tremendous comeback season.

In short, USA by a million.

2019 Presidents Cup coverage begins Thursday, December 12, with the fourball opening round followed by the foursome matches on Friday. Saturday brings a full slate with the second round of fourball and foursomes, and closing on Sunday with the singles matches. Tune into the Golf Channel for live coverage Thursday through Sunday, and NBC for a replay of Sunday. 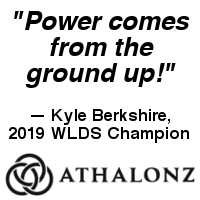